Eye in the sky: Drones to monitor power projects

Ground inspections are passé for the Indian power sector which is set to deploy drones to cut costs and improve efficiency. Heralding a technological leap in power transmission, the companies, especially state-owned Power Grid, would now use drones for monitoring project development in critical areas.Senior officials in power ministry said Power Grid got approval from a committee comprising the ministries of defence, home affairs, power and allied departments. While Power Grid confirmed the development, it did not share details.

Government officials said among private companies Sterlite Grid has also applied for using drones to monitor its projects. Sterlite is the largest private operator of independent power transmission systems in the country.

Drones are unmanned aerial vehicles (UAVs) which can be remotely controlled or can fly autonomously through software-controlled flight plans. While advanced flying robots used in defence can do various things, the drones to be used by power sector would be simpler ones with cameras to capture photos and record videos.Power transmission companies, which usually have to build infrastructure in inaccessible areas, have applied for drones to reduce their maintenance cost. Sector experts said that with increasing thrust on delivering transmission projects on time, developers are increasingly deploying aerial technologies.The power ministry has initiated an incentive scheme for transmission projects which get commissioned ahead of schedule. The government in July 2015 issued an order that transmission projects won under tariff-based competitive bidding (TBCB) and those awarded to Power Grid for system strengthening would start getting transmission charge from the date of commercial operations, even if it is ahead of the schedule.Power Grid Corporation of India Ltd (PGCIL) is likely to use drones for its project in difficult terrains, said an executive. “The company is likely to experiment drones at two-three sites for now, mostly in hilly areas and in the north-east,” he said adding that drones are cheaper and more efficient than hiring helicopters for aerial monitoring.A typical transmission tower is 100 meter-tall above the ground. Sector executives said drones would be used to capture work progress at construction sites and facilitate speedy response during emergency.Many inaccessible areas are covered under the national grid. For instance, Sterlite Grid has tied up with US-based Burns & McDonnell to implement a transmission line between Punjab and Jammu & Kashmir with the help of heli-crane. It is in discussions with a US-based aviation company to use heli-crane for a transmission project in India for the first time.Drones are catching up in other infrastructure sectors as well. National Highway Authority of India (NHAI) recently signed MoU with National Remote Sensing Centre (NRSC) under Indian Space Research Organization (ISRO) and North East Centre for Technology Application and Research (NECTAR), Department of Science and Technology for use of spatial technology for monitoring and managing highways across India. NECTAR uses UAVs for acquiring aerial images for infrastructure planning. This technology will be useful in monitoring construction progress, road asset management, feasibility and project report preparation, assessment, etc.After being used extensively in movie shoots, drones caught the fancy of other sectors when a restaurant in the US used them for pizza delivery.An e-commerce giant has sought the government’s permission to use them for product deliveries. Nowadays, drones are being used not only by private metrological agencies and forest and agricultural research bodies, but also in grand Indian weddings.

Other information NCIS, Comparison between NAIS Vs MNAIS Vs NCIS

In a bid to address the rural distress that is driving farmers to suicide, the NDA government on Wednesday announced a new Rs 17,600-crore crop insurance scheme to cover loss of crops due to natural calamities like drought at a very low premium payout by farmers. The scheme will be rolled out from the coming kharif season starting June.
The move is also to be seen in the backdrop of the drubbings the BJP suffered in the recent elections in Bihar and elsewhere, which clearly pointed to a growing disillusionment in the rural India about the central government.
Reuters
According to the government data, as many as 207 districts in nine states have been hit by drought. As much as 90 lakh hectare of land had been affected due to drought and the affected states had sought relief of over Rs 25,000 crore from the central government, a recent IANS report said. Also 302 districts in the country had received 20 percent less rain, which, though is not categorised as drought, will affect the farmers in these areas.
Announcing the sop, prime minister Narendra Modi described the scheme wherein the Centre will provide Rs 8,800 crore annually to make up for almost all of the premium for the crop insured, as a move "that will transform the lives of the farmers in a big way".
Here are the key facts about the new scheme:
Salient features:
Under the scheme Pradhan Mantri Fasal Bima Yojana (PMFBY), the state will also provide a matching contribution while farmers will pay only only 2 per cent of the premium fixed by the insurance company for kharif foodgrains/ oilseeds crops and 1.5 per cent for rabi foodgrains/ oilseeds crops. The premium will be 5 per cent for horticultural and commercial crops for both seasons.
"This new crop insurance scheme will have lowest premium for farmers in the history of Independent India," said Home Minister Rajnath Singh.
There will be no provision of capping the premium rate so as to ensure farmers get a higher claim against the full sum insured. At least 25 per cent of the likely claim will be settled directly on farmers' bank account.
According to the government, farmers will get a higher claim for the full sum insured unlike the existing schemes such as National Agricultural Insurance Scheme (NAIS) and Modified National Agricultural Insurance Scheme (MNAIS).
The new scheme will cover yield loss of standing crops, prevented sowing/ planting risk, post harvest losses and localised risks, including inundation.
At present, loanee farmers are mandated to take crop insurance cover. The new scheme is open to all farmers irrespective of whether they are loanees or not.
There will be one insurance company for the entire state, farm-level assessment of loss for localised risks and post-harvest loss. And private insurance companies, along with the Agriculture Insurance Company of India Ltd, will implement the scheme.
The government has also said the state governments have to make required changes in the law to bring in even the tenant farmers under the derisking fold.
The difference from the earlier schemes:
The government has elaborated how the new scheme is different in simple table: 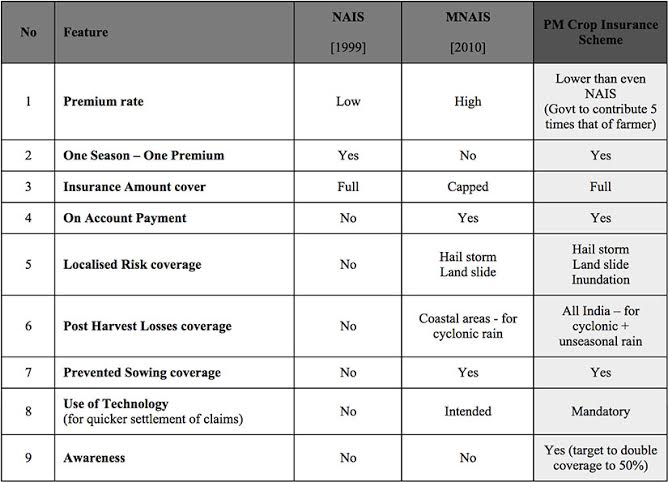 “This is certainly the best for the farmer till date as it provides for localized events and removes the cap,” a report in the Mint newspaper quotes T. Haque, director, Council for Social Development, as saying.
Apart from this, another major aspect of the scheme is the indented use of technology. The government will use remote sensing and smartphone and other modern technologies for accurate and quicker crop yield estimations.
The challenges:
As is evident from the government's table above, this is not the first time the government has launched a scheme. Earlier in 1985 the government had launched a Comprehensive Crop Insurance Scheme (CCIS) 1985. It ran until 1999. In 1997-98, the government again launched Experimental Crop Insurance Scheme, which closed in one year. In 1999, the government launched National Agricultural Insurance Scheme (NAIS).
However, the coverage of these schemes has been too low due to lack of awareness among the farmers. According to media reports, the coverage as of now stands at just 23 percent. The government is aiming at 50 percent coverage with the new scheme. This is going to be the biggest challenge for the government.
Secondly, crop insurance sector is bogged down by frauds. According to an earlier report in The Economic Times, bank officials, insurance officials and farmers are hand in gloves to siphon off insurance money. How is the new scheme going to address this?

The government proposes to implement this scheme from the next kharif season starting this June.

The Centre plans to cover 50% farmers through the scheme in next 2-3 years as against the current coverage of 23%.

Besides lower premium, the ministry has proposed there will not be a cap on the premium and reduction of the sum insured, 25% of the likely claim will be settled directly on farmers account, there will be one insurance company for the entire state, and farm level assessment of loss for localised risks and post harvest loss.

The ministry has proposed that private insurance companies along with Agriculture Insurance Company of India Limited (AIC) will implement the scheme. It has recommended that all claim liability will be on insurer and the government would give upfront premium subsidy.

Under NAIS, launched in 1999 and being implemented in 14 states by government insurance company AIC, the premium burden on farmers is up to 3.5% for foodgrains and oilseeds crops while actuarial rates for horticultural crops and cotton apply. However, all the claims liability is on the government.

Whereas, under MNAIS, launched in 2013 but implemented in only six states, the premium burden on farmers varies between 2 and 15% but the actuarial premium goes up to 57% depending on the risky crops and areas. But due to capping of the premium, the sum insured gets reduced and as a result farmers are getting lower claim amount.

The ministry has also implemented a Weather-based Crop Insurance Scheme since 2013 in 12 states.

Last year, only 27% of the crop area was insured under these three crop insurance schemes, which cost Rs 3,150 crore to the national exchequer.

The cabinet has cleared the launch of the country's first major crop damage insurance scheme from the next fiscal year, a move that would further strain government finances but help Prime Minister Narendra Modi to woo rural voters ahead of key elections.
Stung by criticism of ignoring the concerns of rural India where over two-thirds of the country's 1.25 billion people live, the government on Wednesday fielded as many as three cabinet ministers to underline the importance of the scheme whose budget will more than double in three years.
Modi is trying to placate rural voters after the impact of unseasonal rains and two straight years of drought on agriculture dented his popularity and contributed to a humiliating loss for the ruling Bharatiya Janata Party in elections late last year in the largely rural state of Bihar.
Further elections are due in the states of West Bengal, Kerala, Tamil Nadu and Assam this year.
"It is a historic day," Modi tweeted after the scheme was announced by the ministers of agriculture, home and parliamentary affairs. "I believe the prime minister's crop insurance scheme, inspired by the well-being of farmers, will bring about a huge change in the lives of farmers."
Several debt-laden farmers committed suicide last year, and agriculture minister Radha Mohan Singh has said that delays in clearing payouts for crop losses were the "biggest reason for destroying farm families".
The government would now ensure faster settlements by increasing the use of technology, including smartphones to capture crop data. It would also reduce premiums to be paid by farmers to 2 percent for summer-sown crops and 1.5 percent for winter crops.
The current premium share for farmers can go as high as 40 percent, which is one of the main reasons that only about a tenth of India's estimated 263 million cultivators opt for crop insurance.
New Delhi will more than double the budget for the crop insurance scheme to 77.50 billion rupees ($1.16 billion) in the fiscal year beginning April 2018.

Posted by Remote Sensing Agriculture at 03:05 No comments:


5. Streamline loss assessment procedures and help in building up huge and accurate statistical base for crop production.
Posted by Remote Sensing Agriculture at 03:00 1 comment: