As-on-date the number of satellite missions dedicated to remote sensing (earth Observation) has increased significantly over the past decade and will further increase over decade and beyond.  The Remote Sensing technology provides timely and very cost effective information about the crops grown.  The satellites orbiting round the earth provide images of ground at frequent time intervals.  Earlier days we have to wait till revisit the area, but now-a-days the satellites can be programmed, so as to acquire the images of any area at required time.  This is very helpful in getting an image of thee area when specific growth stage of the crop is to be mapped or identify the damaged area during flooding, etc.

There are several satellites and sensors which are best for agricultural applications Examples are given below along with applications:

The below satellites and sensors are best suits for crop health monitoring due to its frequency of revisit (twice a day – MODIS & NOAA) and its coverage with low resolution of satellite images. And AWiFS is also includes for this application due to its coverage.

The below satellites were designed for mapping of agricultural plots, in addition to GeoEye-1, World View-1&2, but these below satellites and sensors are good for regional level mapping of agricultural plots and also having the capability of programmed to acquire the images of any area at any point of time (some times this may obstruct because of climatic conditions)

In the case study we have used MODIS and monitored the crop during all stages of crop growth.  Case study will be published in upcoming articles.
Posted by Remote Sensing Agriculture at 22:24 No comments:

High resolution, contemporary data on human population distributions are vital for measuring impacts of population growth, monitoring human-environment interactions and for planning and policy development. Moreover the population density of an area can be one of the most important determining factors for business and marketing planning. It is not enough to know how many consumers live in a specific state or city. It is important to know how many people live in a particular radius. This will allow planners to choose a location for a business that is accessible to the largest amount of people.  Generally, population maps available in simply GIS maps wherein Census population is either attached to a point or to a polygon of a location. There is no such product available in the industry, which can show the distribution of population in a realistic manner. A product is therefore required wherein business analysts could know the population using their own ‘Area of Interest’ or within a particular ‘Buffer Area.’
Our Expert team can generate these raster or gridded population distribution map for a city or a region at 5m/10m/20m/30m/50m/100m. It is the raster dataset of population totals based on administrative boundary data and population estimates associated with those administrative units. The resulting raster data is easier to analyze and display than the original scattered points. The base data could be on details as per the last published Census availability.

Solution: Our Expert team has come up with a unique product wherein ‘ Latest Satellite images’ along with the ‘latest Census -Population Data’ have been used to create ‘Population Distribution Map’ The population distribution map shows only the pixels having some population. The uninhabited areas are shown as null or zero value. The population density of each pixel varies depending upon the spatial extent of residential areas as derived from the satellite image, and the population of the area as provided by Census data. 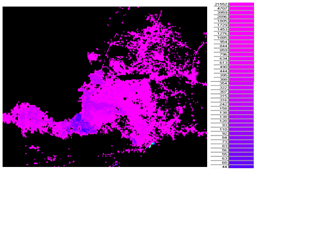 Posted by Remote Sensing Agriculture at 23:31 No comments: